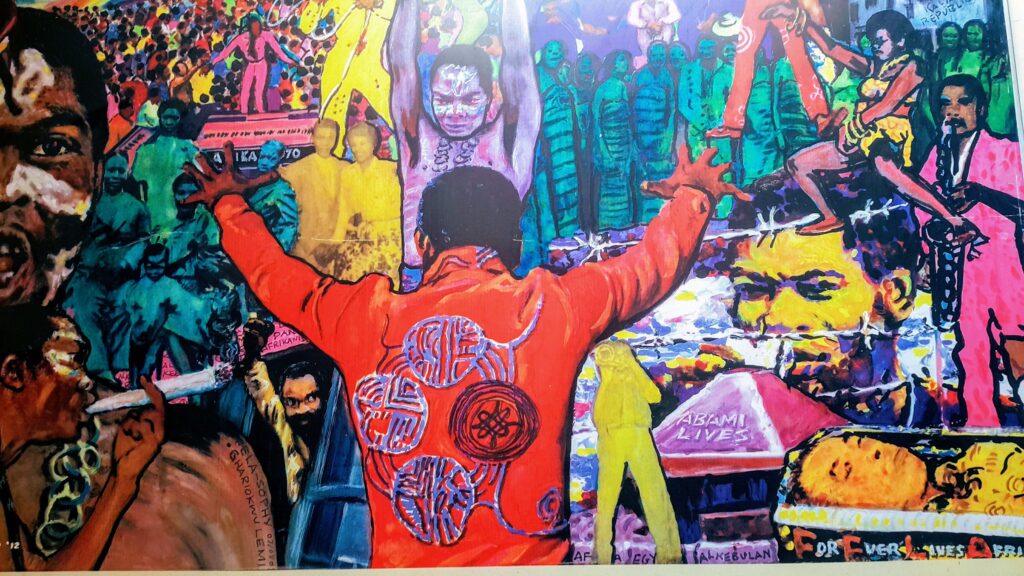 As a 20 year old fledgling music manager, I first heard of Fela Anikulapo Kuti via the pages of the New Musical Express (NME). His reputation as a ‘musical freedom fighter’, using music to battle the repressive dictatorships in Nigeria, drew me towards him before I’d even heard his music.

We rarely heard Fela on the UK radio in those days as the BBC’s John Peel, possibly the world’s most influential  ‘New Music’ radio DJ, didn’t play him.  LPs were expensive and a big investment, especially if imported, so it wasn’t until later when my friend and avid jazz fan, Tony Higgins, gave me a tailored C120 cassette compilation of his own favourite tracks, that I first truly experienced just how life-enhancing Fela’s music was and I started to investigate his utterly engaging back-story. That TDK cassette created a passion in me that remains as alive now as when I heard the magnificent royal fanfare opening of ‘Water Get No Enemy’ leaping out of my Sony Walkman’s orange headphones for the first time.

This ignited an obsession in me to collect anything and everything connected to the Abami Eda. I found original album artwork, paintings, concert posters, documents and privately published books and of course… lots of records.

In the 1990’s, as record collectors were divesting themselves of their 7” singles and LPs, I went in the opposite direction and sought out copies of Fela’soriginal releases, especially the original Nigerian pressings, of which there were a small supply in London via Nigerians who had emigrated to the UK in the 1970’s and also from wonderful Stern’s Record Store in central London.

I amassed a treasured collection of hundreds of Fela’s vinyl and cassette releases, ranging from his very first release on 78 rpm 10” shellac as Fela Ransome-Kuti and his Highlife Rakers, then self-released Koola Lobitos singles on his own RK label, through to obscure bootlegs of live shows of songs that Fela had never recorded in the studio, such as “Big Blind Country”.

Later my career took me around the world and eventually Lagos, where I met the Kuti family when in 2008 I helped organise an Africa Express show with Tony Allen and Damon Albarn at The New Afrika Shrine, which featured Tony Allen reuniting with Femi Kuti, Fela’s son, for the first time since Fela’s passing.  Tony and I later shared many adventures in Mali, DR Congo, Ethiopia and elsewhere across Africa and Europe  via the Africa Express project. I was lucky

In 2012  I took Fela’s second musical son, Seun along with his father’s band Egypt 80, to Pune in India to put on the very first Afrobeat show in the sub-continent.

In 2019 I took Seun Kuti and Egypt 80 to South Korea to play the first Afrobeat concert in that country at the DMZ Peace Train Festival.

In October 2022 I loaned my collection of Fela’s Nigerian record releases, plus original  paintings and artwork (the 3 original paintings posted here), to The Philharmonie de Paris for the ‘Fela Anikulapo Kuti – Rebellion Afrobeat’ Exhibition and write an article for the exhibition catalogue about ‘Collecting Fela’.

My hunt for interesting music, literature and art related to the man ‘Who Carries Death In His Pouch’ continues to this day. There is always more to discover about Fela! 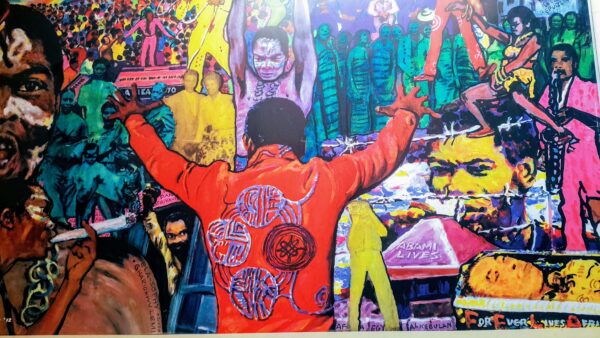 “Felasophy” by Lemi Ghariokwu, used as the cover for ‘Rough Guide To Afrobeat Revolution’ album.
(owned by Stephen Budd) 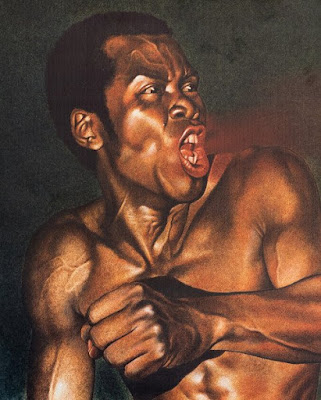 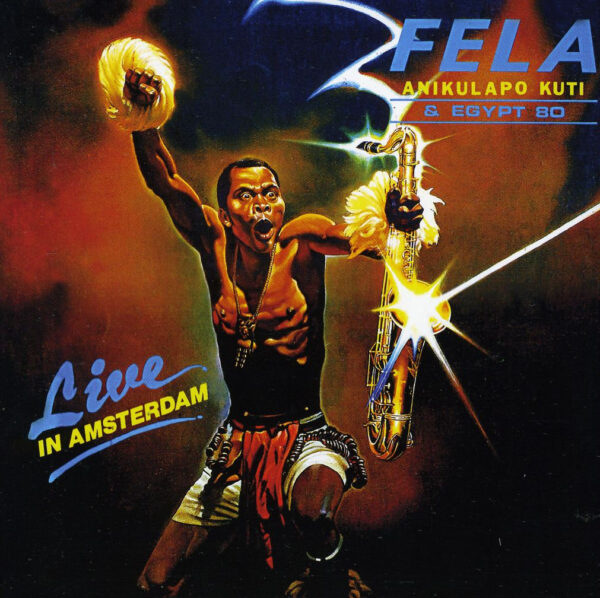 A report on the Rebellion Afrobeat : Fela Kuti exhibition opening in Paris October 22 which features the collection of Stephen Budd

Stephen Budd is not commercially linked to Fela Kuti or other members of the Kuti family, but happy to be asked to comment, discuss or otherwise promote Fela’s legend in any way.